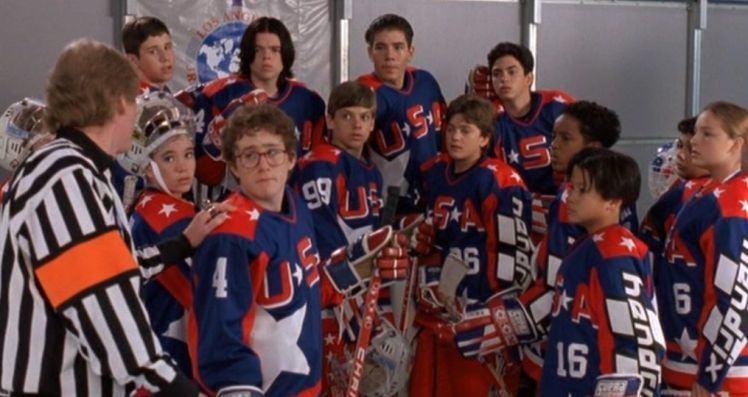 To all of our loyal readers (I’m going to guess that applies to like 5 people at this point) I’m going to give you full disclosure before I write this post. I’ve had a few beers before writing this, today is our good friend Brandon Traditi’s birthday (shoutout Diti). After arriving home from doing friend activities, all I want to do is talk with you guys about the abomination of a movie that is The Mighty Ducks 2. I can guarantee that anybody who remembers this movie favorably is either an absolute crackhead or has not seen the movie in over a decade.

The Mighty Ducks 2 is AN ABSOLUTE DISGRACE to every movie that has ever been made in the history of mankind. The other day, I watched it with a few friends and through the duration of this film I was perplexed by how Disney let this movie happen. I understand that this was in the early nineties before their Pixar goldmine blew up but COME ON. Walt Disney’s racist ass must have been turning in his grave when Satan let him know that this movie exists.

The movie revolves around the lovable, yet extremely untalented Mighty Ducks from the first film. However in this debacle of a movie THEY ARE PLAYING IN THE JUNIOR OLYMPICS. The first movie (as cheesy as it was) was at least believable. Coach Gordan Bombay, played by Emilio Estevez of Breakfast Club fame is the coach of a ragtag team of nonathletic losers who somehow ends up winning games. It’s a feel good story for the family to enjoy. BUT HOW IN ALL THAT IS GOOD IN GOD’S GREEN EARTH CAN YOU TELL ME THAT THIS TEAM OF MISFITS IS THE TEAM THAT THE UNITED STATES PUTS OUT FOR THEIR JUNIOR OLYMPICS.

The one Duck that is the most outrageous at the Olympic level is no one else but beloved Goldberg. Goldberg is a lovable outcast loser, BUT HIS SKILLS IN GOAL ARE A DISGRACE TO ANYBODY WHO HAS EVER PLAYED A SPORT IN THEIR ENTIRE LIFE. HOW DID GOD ALLOW THIS PIECE OF SHIT MOVIE TO BE MADE. Ryan Miller, probable Hall of Fame goalie was around the same age as the Ducks when this movie was released and you’re telling me FAT GOLDBERG was the kid the picked to represent the U.S. of A???? No shot.

My next big issue with this movie is how they just picked up a teenage Keenan Thompson off of the streets of Los Angeles and decided to add him to the team for the biggest game of their life against the Iceland team. I don’t give a damn how good your “knuckle puck” is, that shit just doesn’t fly. This movie is full of casual racism and Keenan Thompson’s friend teaching the small Asian Mighty Duck how to be tough and beat up his hockey opponents is just one of the many moments that would not fly in today’s America.

Despite all of the shit that I’ve ranted about already, the most ridiculously absurd and awful moments of this movie came when they changed out of their Team USA jerseys after the Third Period into their Mighty Duck’s jerseys. THEY ARE SUPPOSED TO BE REPRESENTING THEIR COUNTRY AND THEY PULL THAT SHIT??? I DON’T THINK SO, DISNEY. The Second Amendment gun-nuts would have a field day with that moment and demand that the Disney corporation was disbanded immediately.

To conclude my rant, Mighty Ducks 2 was flat out top 5 worst movies ever created. No amount of 90s nostalgia can make this movie any better than the absolute disaster that it was. It baffles my mind that somehow Disney allowed ANOTHER sequel after this movie was released.

Thank you Walt Disney Corporation for that hour and a half I will never get back from my life.